Tuesday last week I traveled from Albany to New York City to see/hear the Afghan Youth Orchestra with two young Afghans and their Mother/caretaker while they are in the US going to school. We arrived found parking and wondered around Times Square until it was time to attend the concert.  All of us had been anticipating this day since we had decided to come.

The story of the Orchestra is remarkable. As the Minister of Education His Excellency Faroq Wardak stated, “Music is in our past, our present and our future.” One of the tragedy’s of Afghan history was the destruction of all musical instruments and means of playing music by the Taliban who mistakenly believe that music is unIslamic. Dr. Ahman Sarmast who had emigrated to Australia began a systematic revival of Afghan Music returning to Kabul to develop the The Afghanistan National Institute of Music (ANIM).  The school located in Kabul is “committed to providing a dynamic, challenging, and safe learning environment for all students, regardless of gender , ethnicity, or social circumstances. ANIM focusses on supporting the most disadvantaged group in Afghan society — the orphans and street-working children– by helping them attain a vocation that will allow them to reach their full potential, while contributing to their emotional health.”

The concert was two days before Valentines days so it was interesting attempting to describe the holiday and all the roses in the flower markets and heart decorations.

As we waited for the concert to begin we made contact with a women sitting behind us who had taught William Harvey the conductor who had been a Juilliard student. The concert began with a number of very traditional Afghan Folk tunes played by a number of the Afghan traditional stringed instruments. These students set on low carpet-covered platforms playing in the traditional style featuring both girls and boys. 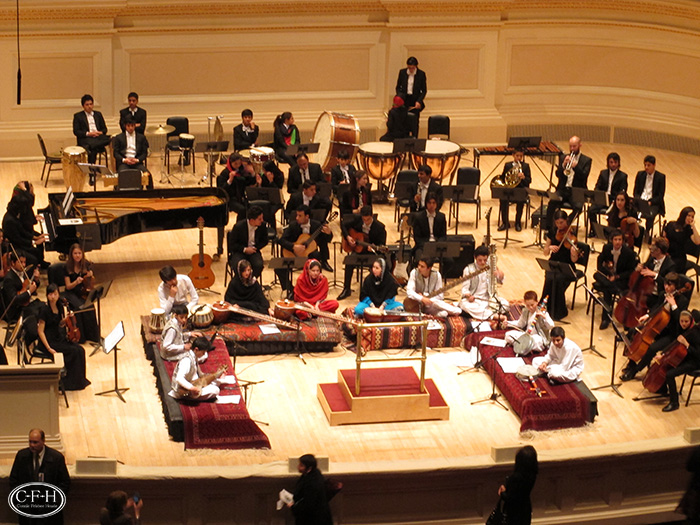 Aqil, who I sat next to, recited the words to the tunes as I asked what the meaning was of the music. The first was a love song for Afghanistan and the second a love song for a woman.  The instruments ranged from the sitar in the center, rubab on the left, tabla (percussion) behind, ghichak on the right, and sarod, tanbur and dilruba in between.  I was told by both the young Afghans that there was one instrument not represented.

The two remarkable pieces that they played were Ravel’s Bolero and an adaptation of Vivaldi’s Four Seasons, The Four Seasons of Afghanistan.  It really was sweet to read the notes and realize just how much of the culture I have absorbed through the years and the depth of the four seasons.

Here is the New York Times review of the concert.

After the concert, Aqil and Mursal wanted to met the Afghan students so we found our way to the back stage door and waited. Aqil dressed in traditional Afghan dress was often mistaken for one of the orchestra.  Please if you wish to know more about the Afghan youth orchestra and their journey and hear some of their music follow the following videos:

Here is the ending piece for peace that they also played as an encore.

I do hope that you enjoy the gift these young musicians share with us.

Dreaming of Peace for these young people,